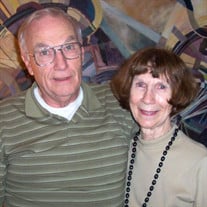 Barbara Hagist 1937 – September 24, 2020 Barbara and Edward are together again! Barbara Hagist passed away on Thursday night, September 24, 2020 at the age of 82. Barbara was born in Iowa and grew up on the farm with her two sisters, Mary Jane and Martha. As the story goes, when Barbara was four years old, her older sisters were taking piano lessons. When they would finish practicing, Barbara would climb up on the piano bench and effortlessly play the music she had just heard. She found her gift early in life. Barbara went to High School in West Chester Iowa. During this time, she met the love of her life, Edward Hagist. When Barbara needed to give a speech for school, her mother connected Barbara with Ilo Hagist to help her. Little did she know, Ilo would become her future mother-in-law. It was during those speech tutoring lessons that she met Edward. Barbara majored in Flute and Piano at the University of Iowa, in Iowa City. While she was finishing college, Edward moved to Davenport Iowa to start Chiropractic College. 1959 was a busy year, as she graduated, moved to Davenport, married Edward, and started a job as an elementary school music teacher. While in Davenport, Barbara and Edward had two daughters, Laurie, and Darcy. When Edward graduated, they moved to Tulsa Oklahoma, so Edward could begin his Chiropractic career, and Barbara worked as a librarian. While in Tulsa, they had a son, Brent. Later, Barbara obtained her master’s degree in library science. She was an avid reader throughout her life, and her house was always filled with books. Her favorite books were Agatha Christy mysteries and anything about angels. Few people knew that Barbara completed all the coursework for her Ph.D. in Industrial Engineering at the University of Oklahoma. However, she took a job as the director of the St. Charles City/County Library system in Missouri before she could finish her dissertation. Although she left Norman, this did not stop her from being a lifelong OU football fan. In 1975 Barbara and Edward moved back to Edward’s hometown, Keota Iowa, where they soon welcomed their son Aaron and daughter Tausha to the family. Barbara and Edward moved many times between Iowa, Missouri, and Oklahoma, until 1981, when they found their place in the world in Pauls Valley, Oklahoma, where they spent the rest of their lives. They knew home when they saw it. Barbara and Edward took care of Pauls Valley Residents in their Chiropractic office for over 20 years. Barbara managed the office and also took great joy in being the music director at the First Presbyterian Church, which gave her a sense of purpose through the creation of beautiful music with her choir. She also enjoyed the challenge of playing the pipe organ on Sundays. The Hagist family also played an active role in the Garvin County Community Living Center (GCCLC), a non-profit organization that serves people with developmental disabilities in Pauls Valley. GCCLC held a special place in the hearts of the Hagist family. Edward was a founder and board member since it was established 1982. Barbara and their daughter Laurie carried on the mission as board members, and Laurie continues the tradition today. Between the office, the church, and GCCLC, Barbara and Edward were privileged to know many residents in Pauls Valley. They were grateful for the Pauls Valley Community for all of the love and support they gave over the decades. Especially during the last few months of her life, some very special people in this community supported Barbara, which allowed her to live in her home, with her poodle, “Little Dog,” before she passed away. Barbara was preceded in death by her husband Edward Hagist, and her sister Martha Martens. Barbara’s surviving family includes; daughter Laurie Wickenkamp and her husband Rick (Oklahoma); daughter Darcy Miller and her husband Jim (Florida); son Brent Hagist and his wife Mary (Iowa); son Aaron Hagist (Arkansas); and daughter Tausha Hagist (Pauls Valley); six grand-children, including two sets of twins; three great-grandchildren; and her sister Mary Jane Lyons. In lieu of flowers, donations can be made in Barbara’s memory to Garvin County Community Living Center, at Wooster Funeral Home, P.O. Box 1338, PV. 73075. A private family memorial service will be held at 2:00 p.m., Monday, October 5, 2020 at the First Presbyterian Church in Pauls Valley.

The family of Barbara Hagist created this Life Tributes page to make it easy to share your memories.