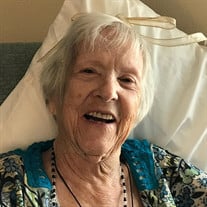 Avis Heloise Neill was born November 19, 1923 to William Baxter Neill and Mary Magnolia Sherman in Santa Monica, California. Although born in California, she was a child of the dust bowl, her parents having briefly migrated to California from West Texas during the worst of the catastrophe. Moving back to Trent, Texas (outside Merkel) with her parents and siblings William LaRue Neill (1925-2007), Mary Virginia Neill Sandusky Hamner (1927-2010), and Betty Jo Neill Gunn (1930-) she grew up in these sparse desolate lands. While in attendance at Trent public schools, Avis consistently achieved highest marks winning the award for her grade and graduating after 11 years. A rebel for her time, she was a basketball star for her local team and left home to attend business school in Abilene, Texas. While in Abilene, she met the dashing young soldier Jack Dempsey Eads, marrying him on May 30, 1941. Their first child, Lawrence Vaughn Eads, was born August 11, 1943 in Nolan, Texas while Jack served as a medic in the Pacific Theater of World War II. Stationed in Germany following the war their second child, Margaret Sharon Eads was born September 13, 1947 in Heidelberg Germany. Every duty station around the world Avis, quickly found work as an account, steadily rising in responsibility, until retiring as head of payroll at a large metropolitan hospital in El Paso, Texas. In 1968, she married the love of her life, Joseph Nagy, retiring with him to Clinton, Arkansas in 1974. Over the next forty years she was an active fisherwoman, gardener, craftswoman and member of various social organizations including NAARP. She was also active in her local Methodist Church. Moving to Elmore City in 2004 to be close to family, she gained a new family through the First United Methodist Church of Elmore City. Avis is survived by her daughter Margaret Aniol of Edmond, Oklahoma, a sister Betty Jo Gunn of Santa Clara, California, grandchildren Robert Mather, Daniel Stephens, Terry Jean Stephens, Kimberly Candelario, Steven Eads, Jennifer Babb, Clinton Eads, and Bryan Stephens, sixteen great-grandkids and eight great-great-grandkids. She was also preceded in death by one son, Larry V. Eads. Services will be held 11:00 a.m., Thursday, February 28, 2019 at the Elmore City First United Methdist Church with Rev. Caroline Lovett officiating and interment at 11:00 a.m. Friday, March 1, in the National Cemetery in Little Rock, Arkansas with her beloved Joseph. Visitation is scheduled for Tuesday, February 26, from 9:00 a.m. – 4:30 p.m. and Wednesday, February 27, 2019 from 9:00 a.m. – 7:00 p.m. at Wooster Funeral Home in Elmore City. You may send a condolence to the family at www.woosterfuneralhomes.com.

Avis Heloise Neill was born November 19, 1923 to William Baxter Neill and Mary Magnolia Sherman in Santa Monica, California. Although born in California, she was a child of the dust bowl, her parents having briefly migrated to California from... View Obituary & Service Information

The family of Avis Nagy created this Life Tributes page to make it easy to share your memories.