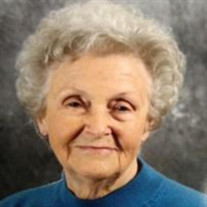 Asena Maeleen Huddleston, formerly of Pauls Valley, Oklahoma, passed away Wednesday, January 19, 2022 at The Commons Nursing Home in Enid, Oklahoma. Asena was born May 18, 1928 in Westville, Oklahoma and lived at the Methodist Home for Children in Britton and later Tahlequah, Oklahoma from childhood through her teenage years. She graduated from Bagley High School in Tahlequah with the class of 1946. She met her husband, James Orlen Huddleston, while living at the orphanage and they were married in the Methodist Home's chapel on May 25,1947. Asena was a devoted wife and mother who also enjoyed a long and fulfilling career in banking until her retirement. She enjoyed volunteering with organizations like Meals on Wheels (later on the Samaritans) and as a reading tutor at Jackson Elementary School. Although she always considered herself a lifelong Quaker, she was an active member of the United Methodist Women at Pauls Valley United Methodist Church for many years. She will be remembered for her friendship, service, generosity and grace. Asena was preceded in death by her husband James Huddleston, grandson Michael Fagan and daughter-in-law Bettina Huddleston. She is survived by her four children: Paul Huddleston (Moore, Ok), Barbara (Terry) Gray (Derby, Ks), Kathleen James (Meyersville, Tx), and Jonathan (Brenda) Huddleston (Enid, Ok). Asena is also survived by six grandchildren, fifteen great grandchildren and six great great grandchildren. Cremation has taken place and services will be held at 10 a.m. Saturday, February 5th at Wooster’s Funeral Home in Pauls Valley. In lieu of flowers, please make a donation to the Pauls Valley Samaritans or the Nora Sparks Warren Library.

Asena Maeleen Huddleston, formerly of Pauls Valley, Oklahoma, passed away Wednesday, January 19, 2022 at The Commons Nursing Home in Enid, Oklahoma. Asena was born May 18, 1928 in Westville, Oklahoma and lived at the Methodist Home for Children... View Obituary & Service Information

The family of Asena Huddleston created this Life Tributes page to make it easy to share your memories.