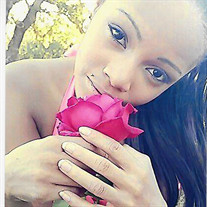 Arion Lawrence of Pauls Valley, Oklahoma was born to Percy Lawrence and Ronette Harper-DePriest on April 2, 1996 in Ada, Oklahoma and passed from this life on January 4, 2017 at her home in Pauls Valley, Oklahoma at the age of 20 years. Arion grew up and attended school in Bryan, Texas and Pauls Valley, Oklahoma where she graduated high school. She was active in basketball for the Boy and Girls Club and cheerleading while attended school in Texas. Arion was on the pom squad at Pauls Valley. She then attended East Central University in Ada, Oklahoma. In her spare time she enjoyed music, photography, and dancing. She loved spending time with her friends, including a special friend and cousin, Jeree Mitchell. Arion is survived by: Parents: Percy Lawrence and wife Karen of Norman, Oklahoma Ronette Harper-DePriest and husband Darren of Pauls Valley, Oklahoma 1 sister: Reial Lawrence of Pauls Valley, Oklahoma 2 step-sisters: Megon Steele of Norman, Oklahoma Hallie DePriest of Wynnewood, Oklahoma 3 step-brothers: Chris Hill of California Ruben Jones of Tulsa, Oklahoma Tyler DePriest of Wynnewood, Oklahoma Grandmother: Sylvia Lee Gordon of Tatums, Oklahoma Grandfather: Percy Lawrence, Sr. of Colorado Springs, Colorado A host of family and friends. Arion was preceded in death by: Her grandmother: Bertha Mae Harper Funeral services are scheduled for Wednesday, January 11, 2017 at 3:00 p.m. in the Pauls Valley High School Auditorium with Rev. Michael Eaton officiating. Interment will be in the Bethlehem Cemetery under the direction of Wooster Funeral Home. You may send a condolence to the family at www.woosterfuneralhome.com.

The family of Arion Lawrence created this Life Tributes page to make it easy to share your memories.