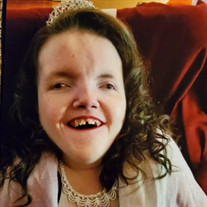 Andrea Diane “Sissy” Santine was born February 26, 1975 in Clinton, Oklahoma to Diana Kay and Andrew David Santine. Growing up, Sissy loved to go to her brother’s sporting events. Her parents took her everywhere. When she was 9 years old, Sissy moved to Southern Oklahoma Resource Center where she could receive the medical care and resources she needed. During her time there, many special friendships were made. Susan Scruggs was one of Sissy’s favorites, and they had a very special bond. Sissy received her high school diploma through Pauls Valley High School, and she worked in paper recycling. When SORC was closed, her parents worked very hard to make sure she could remain close to and in Pauls Valley. There were a lot of people involved to make it possible, and in March of 2015, it was accomplished when her home was established on Cherry Street. Moving Sissy into the community was scary for her family, but it was soon discovered that it was a huge blessing. Everyone that met Sissy fell in love with her fun spirit. For somebody who couldn’t speak words, her laugh and smile spoke volumes. She loved to sit outside when the weather was nice, and she enjoyed the wind blowing through her long, beautiful hair. She adored jewelry and her hair bows. She loved Toby Keith and would giggle when the song “Red Solo Cup” was played. Sissy was also sensitive to certain songs and situations which showed her kind and pure heart. She was an absolute blessing to all who knew her. Sissy was preceded in death by her mother, Diana Kay Meacham Pyle of Elmore City, grandparents, Clint and Willie May “Billie” Meacham of Clinton, OK and Andrew James Santine of McAlester, OK. Sissy is survived by her parents, David and Billy Jean Santine of McAlester, and Jerry Pyle of Elmore City, OK; Grandmother, Bette “Memaw” Santine; Siblings, Chris and Kim Kerby, of Edmond, OK , Dustin and Vanessa Sorrels of Marlow, OK, Josh and Davey Harper of Stillwater, OK , Steven and Brenda Pyle of Sulphur, OK , Mike and Carolyn Rogers of Davis, OK , John Duff of Talihina, OK, Laramy and Tara Duff of Eufaula, OK , Matthew and Rachel Vaughn of McAlester, OK , plus many nephews, nieces, and other family. Sissy had nurses and caretakers who were with her day and night and just like family; Denese Williams of Pauls Valley, Joanna Easton of Maysville, Bea Thacker of Wynnewood, Misti Titley of Pauls Valley, Helen Hartley of Wynnewood, Katie Davis of Wynnewood, Feleshia Dunkin of Paoli, Teresa Morris of Pauls Valley, Becky Sinclair of Wynnewood, Melanie Shalver of Pauls Valley, and many others who were very close throughout her lifetime. Graveside services for Ms. Santine are scheduled for Wednesday, July 22nd at 10:00 a.m. in the Elmore City Cemetery with Chaplain Tim Duncan officiating. Services are under the direction of Wooster Funeral Homes. You may send a condolence to the family at www.woosterfuneralhomes.com

Andrea Diane &#8220;Sissy&#8221; Santine was born February 26, 1975 in Clinton, Oklahoma to Diana Kay and Andrew David Santine. Growing up, Sissy loved to go to her brother&#8217;s sporting events. Her parents took her everywhere. When she... View Obituary & Service Information

The family of Andrea Diane Santine created this Life Tributes page to make it easy to share your memories.