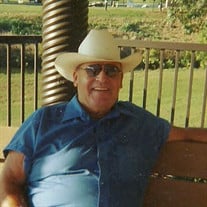 Alvin “Murph” Edward Murphy, 83, passed away on Monday, October 26, 2015 at Integris Southwest Medical Center in Oklahoma City. He was born on August 23, 1932 in Norman, OK to Harve and Helena Murphy. Murph grew up south of Norman, OK. He graduated from Washington High School in 1951. After school he married Bonnie Louise Jones and moved to Norman, OK where they began their family together. Murph worked for Gilt Edge Dairy Company, the Cleveland County Commission – District #3 and then went on to retire from the University of Oklahoma. He became an Ordained Minister in 1961 and continued to be a servant of the Lord to his final day. He enjoyed farming, talking with anyone who had a moment to visit, eating good food and spending time with his family. Alvin is survived by his daughter Gail and her husband David Choate of Murfreesboro, TN, his son Ron and his wife Julie Murphy of Goldsby, OK, his daughter Charlotte Alexander of Yukon, OK, ; grandchildren Shannon, Jared, Jill and Michael; great-grandchildren Dylon, Ethan and Jase; his loving brother, sisters, nieces, nephews and numerous other relatives. A memorial service will be held at Wooster Funeral Home Chapel in Pauls Valley, OK at 10:00 a.m. on October 28, 2015 with Pastor Eldon Archer officiating. Interment will follow at Noble IOOF Cemetery in Noble, OK under the direction of Wooster Funeral Home. You may send a condolence to the family at www.woosterfuneralhomes.com.

The family of Alvin E. Murphy created this Life Tributes page to make it easy to share your memories.