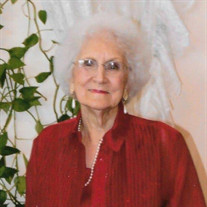 Alberta Elizabeth (Wilson) Reynolds was born on June 28, 1921, in Onley, Illinois and entered her heavenly home, Monday, November 22, at 100 years, 4 months and 23 days. She was the daughter of Thomas Carlyle and Luella Mae (Fitch) Wilson, She married Edwin (Ed) Clinton Reynolds, Sr. on July 14, 1938. In all of her 100 years, Alberta was never idle, a hard worker and a devoted wife and mother. Her first job was being the only female newspaper route carrier in Onley to earn money so she could buy a metronome and take piano lessons. During WWII, because of Ed's physical limitations, they decided to serve their country and do their patriotic duty by moving to Portland, OR, where they worked in the shipyards as welders on Victory warships. Women during that time were designated as Rosie the Riveters, and Alberta wore the name proudly. After the war ended, they moved to Independence, Kansas. It was there that Alberta accepted Jesus Christ as her Lord and Savior in her mid20's. When her family moved to Elmore City in 1953, she became a member of First Baptist Church and has been a member for the past 69 years. She loved serving in the preschool and children's areas, teaching and singing God's word to many, and in later years attending the JOY Sunday School class. She also loved cooking and ministered to many families in times of need and serving funeral dinners. While Alberta loved serving others, her greatest passion was serving her family. She was our greatest prayer warrior, dedicated teacher and loving caregiver. She was THE BEST MOM! Alberta also found time to have many hobbies. She enjoyed knitting, crocheting, quilting, sewing, gardening, visiting shut-ins and reading her Bible. Alberta Reynolds is preceded in death by her husband, Edwin Clinton Reynolds Sr., a son-in-law, Billy Ray Bush, and two granddaughters, Cynthia Lea (Bush) Matthews and April Spree Frusher. She was also preceded in death by her parents, her three brothers and one sister. She is survived by two sons, Edwin Clinton Reynolds, Jr. and his wife Wanda and Randal Alan Reynolds and his wife Anita; three daughters, Alice Jane Bush; Caroline Sue Frusher and her husband Dale, and Nancy Jean Dill and her husband Danny, 16 grandchildren, 37 great grandchildren and 3 great-great grandchildren. The funeral service will be held at First Baptist Church Elmore City, OK at 2:00p.m. on Saturday, November 27, 2021. Burial will follow at the Elmore City Cemetery. A special note of gratitude to Lovie Washington (her 'roomie"), Brenda Garza and Connie White and the staff of the Willow's Assisted Living for the love, care and compassion they provided for our Mom the last few years.

Alberta Elizabeth (Wilson) Reynolds was born on June 28, 1921, in Onley, Illinois and entered her heavenly home, Monday, November 22, at 100 years, 4 months and 23 days. She was the daughter of Thomas Carlyle and Luella Mae (Fitch) Wilson, She... View Obituary & Service Information

The family of Alberta Reynolds created this Life Tributes page to make it easy to share your memories.