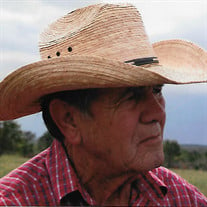 A. L. SCOTT A. L. Scott of Pauls Valley, Oklahoma was born to Alva and Mavalene Scott on November 1, 1936 in Wynnewood, Oklahoma and passed from this life on October 9, 2017 in Oklahoma City, Oklahoma at the age of 80 years. A. L. grew up in Wynnewood, Oklahoma and graduated in 1955. A. L. married Shirley Robinson in 1958 in Pauls Valley. They shared 59 years of marriage in Pauls Valley, Oklahoma. A. L. was a hard worker and a man of morals. He worked in the oil field for years and worked for Lee Way in Oklahoma City. He also was in the trucking business for Dolese. He went back in the oil field as a tool pusher for 7 years for Alameda Drilling. He never did accept his retirement. He looked for a job every day. He also raised paint horses and enjoyed riding. He was a true cowboy. He loved his roping horse Surge. They retired together, either one didn’t like that. A. L. loved his grandchildren very much. Then came the great-grandchildren. Family always came first. He taught his children a lot. He was always there for them. He was a good hard working man. He will be missed terribly by all, but we know he is with his Lord in Heaven. A. L. is survived by his wife: Shirley Scott of Pauls Valley, Oklahoma 2 sons: Sam Scott of Pauls Valley, Oklahoma Sonny L Scott and wife Guyla of Pauls Valley, Oklahoma 1 daughter: Sandra Wells and husband Jerold W. Wells, Jr. of Ardmore, Oklahoma Brother: George Scott and wife Charlotte of Stillwater, Oklahoma Sister: Peggy Harris of Cushing, Oklahoma Grandchildren: Chris Scott, Brooke Scott, Crystal Walrath, Robert Claiborne and Kyle Scott Great-grandchildren: Nevaeh, Keagan, Ja’Colby, Brody, Langston, Jessi, Harli, Laramie and Samuel A. L. was preceded in death by: Daughter: Susan Claiborne 2 brothers: Jerry Scott and Stanley Scott Parents: Alva and Mavalene Scott Funeral services are scheduled for 2:00 p.m. Friday, October 13, 2017 at the Wooster Funeral Home Chapel with Rev. Everette Walrath officiating. Interment will be in the Oaklawn Cemetery in Wynnewood, Oklahoma under the direction of Wooster Funeral Home. You may send a condolence to the family at www.woosterfuneralhomes.com.

A. L. SCOTT A. L. Scott of Pauls Valley, Oklahoma was born to Alva and Mavalene Scott on November 1, 1936 in Wynnewood, Oklahoma and passed from this life on October 9, 2017 in Oklahoma City, Oklahoma at the age of 80 years. A. L. grew up in... View Obituary & Service Information

The family of A. L. Scott created this Life Tributes page to make it easy to share your memories.